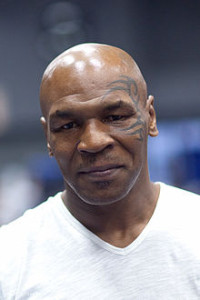 In the world of celebrity gossip when a married spouse cheats on their partner it makes for interesting and juicy conversation. And while there have been a handful of cheating scandals that were made public in the past, even during current times they continue to flurry a host of questions and increase curiosity of the general public.
Mike Tyson recently claimed while he was married to Robin Givens he supposedly caught her in bed with Brad Pitt. Mike claims the incident happened when he and his wife were filing divorce back in the 1980’s.
Many wonder if whether or not this actually happened since so many news outlets have just started reporting on this. Plus, at the time during the divorce, with Mike’s reputation as a professional boxer, you didn’t want to be the one claiming you were messing around with his woman or anything that is his for that matter.

Mike claims when he saw his wife under the sheers with Brad he was “mad as hell.” He claims he felt as if he was in a love triangle, which may have been the case. The reason Mike mentioned the love triangle is because he admitted that he was still sleeping with Robin while they were ending their marriage. Tyson says he would have sex with Givens often before visiting his attorney’s office. Once he got to the office he would tell his attorney she’s a pig and a thief. One the other end, the marriage was short lived lasting only a few months. Many were under the impression that Givens only married Tyson for his money.

Celebrity couples associated with cheating scandals often have interesting twists if they don’t seem out of the ordinary. Cheating scandals often leave lasting impressions on the general public and the media loves dishing out details while twisting one’s thoughts or words. Several cheating scandals have made their mark in history including Dominique Strauss-Kahn and accusations he faced regarding sexual assault against another woman who was a hotel maid. His wife Anne Sinclair claims she stands by him but there have been many claims of Dominique being a womanizer with his wife turning the other cheek toward these as well.

Another cheating scandal that many will not forget includes Former President Bill Clinton and Monica Lewinsky during the mid-1990s. Monica was a White House intern and college graduate at the time the alleged affair occurred. It was mentioned that Monica began a personal relationship with Clinton and spiraled into sexual allegations. Even though Clinton denied sexual relations with Lewinsky there was evidence of a blue dress having semen on it with the semen belonging to Clinton. While claims of perjury and impeachment followed, it seemed as if Clinton got away with cheating on his wife.

Cheating scandals with celebrities seem to have similar details while being different from one another. Women seem to have a liking for men who are in control and have lots of money. While Tyson admitted he had other issues going on during and after the divorce, including a drug addition, he now feels he is in a better place with his current wife, who is his third. Some wonder if he would have done something to Brad if he had the chance.